And as an official last post to anyone who may wander here from time to time...

I may have not played you much towards the end but Warhammer is still the game I've spent the most time on and loved the most.  I met so many friends on it and wish that the golden days could've lasted longer than they did.

On December 18, 2013 Warhammer Online will close its doors forever.

I can only hope that they'll release a non online version or something so I can do quests by myself and reminiscence about the good times.

If anyone who still reads this would like to add me on Facebook feel free to tell me your name in the comments and I'll add you.

Sometimes I wish that instead of playing WAR all day I'd have socialized, made friends, and went on dates.  But now that everything worked out and the game is coming to an end and I look back on all of my experiences playing WAR I wouldn't take back any of it.

I really will.
Posted by Jello at 3:02 PM No comments:

I typed this up months and months ago before I quit. I'll post it for old time's sake.

I made this post a loooong time ago.  Right after I made the first "Good Idea for New Content and stuffs"  I'm never going to finish it obviously since I no longer play WAR and haven't for almost a year now.  But I'll post it anyways.  Just for old time's sake.

It's not finished.  Sorry.


Who's feeling Nostalgic? I am!
Who just read every post I've ever made because of said Nostalgia? I did!

After reading through all of my posts I've decided that this blog was always missing one thing: cowbell Kittehs and that thing would be length! All of my posts so short, so insignificant!
And at the same time all of that Nostalgia makes you resub to Warhammer Online because you really miss the good ol' days where you loathed to be rr 70 so you could be in full warlord and rr 80 was a long way away.  Sadly, those days will never come back, but after looking after over the years of Warhammer we all see that the game was missing one thing (Aside from funding, staff, breaks from EA, etc): Content!!
Do you see how the word "Content" stands out? That is the beauty of the internet things, you can make certain words stick out and look meaningful! Potatoes! Carrots!

Which one of those do you want now? I think the potatoes seem more fulfilling at this moment in time, as they are bolded!

But enough of that, I get off topic very easily, as you can see by the title of this post, this will be yet another patch that should be taken into consideration by Mythic! Here we goooo...

1.4.4 was a major success (Why wouldn't it be) and now we are back.. bringing you not 1.4.5 (Too cliche, we're hipsters now) but instead 1.6.0!! (1.5.0 was also too cliche). Yes! Now instead of telling you a summary in this sentence, we're going to lay it on you slowly so you don't get too excited, we will tell you each new feature over the course of the notes, hooray!

The following is the new Scenerio Line up:

New Content: #1
WOWWWOWOW! Introducing, the autotune your character!! (Sponsored by T-Pain since we're a big shot game now)
Is your character's voice and war shouts lame? Do they lack the spice you want in the game of WAR? Well now for only 600 gold you can buy the autotune microphone (offhand wep)
Now whenever your character yells, it sounds like the autotune gods reached their hands down and made you sound beautiful! (Or fake, whichever you prefer)
Now your character can pass gas and make it sound like Dubstep. (No really, ever heard dubstep? You could make that exact same sound with a fart and autotune) 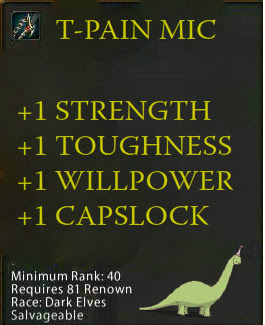 We are introducing changes to ALL classes.  So rejoice! REJOICE!

Archmage
Bug Fisxes: Lol. Typo.  I meant "Fixes." So.. that's been fixed!
Balance Changes: Last patch we introduced the ability "Isha's Pregnant!!!" It's been 6 months later so we're now also adding the ability "Nausea" which you WILL use no matter what. In fact, it's passive, you get a permanent -100 penalty to all stats.

Blackguard
Bug Fixes: All Blackguard helms were not showing the appropriate graphic.  It now correctly shows a traffic cone.
Balance Changes: The entire Mechanic for Blackguard has been revamped.  Because the Parental Counselors of America has been complaining about negativity in today's movies, TV shows, and games.. We have taken away the "Hatred" mechanic and replaced it with "Love."  It is the exact same as "hate" except it's.. "love." Peace!

Black Orc
Bug Fixes: Since release, this class has been talking like uneducated big green brutes! This has always been a bug we have meant to fix but we were always too busy to fix! The Black Orcs now have a nice British accent when they talk, instead of the one they've had.
Balance Changes: New ability called "Anarchy" added, when used the Black Orc scraps the "Plan" mechanic.

Choppa
Bug Fixes: OH MY GOSH THERES A SPIDER ON MY SCREEN.  It's gone now though.
Balance Changes: In fixing the Black Orc speech bug, we also are balancing the choppa's voice to sound like a scottish accent.  We need to get over the "Green people are inferior" crap.

Chosen
Bug Fixes: None! Yes! This one is right!
Balance Changes: Some of the awesome design of their armor made the other classes feel inferior, and here at Bioware Mythic EA (Who even runs this anymore?) our main goal is towards equality.  So we're going to rob the chosen of his armor, and give him some new cloth looking armor. How will this affect balance you ask? No clue.

Disciple of Khaine
Bug Fixes: Fixed a bug that was preventing Khaine's Embrace (group heal) from healing for the appropriate amount, Khaine's Embrace will now heal all party members within 100 feet for 7000 hit points.
Balance Changes: A new ability called "Pay child support" has been added.  This steadily takes off 70 gold per month from your Disciple of Khaine character towards the payment of Isha's baby in which Khaine is the "Baby Daddy" (I use cool slang now, homies)

Engineer
Bug Fixes: The ability "Nuclear Bomb" was not working correctly.  It will now also cause all zones to become as dry as Land of the Dead.
Balance Changes: Added new ability called "Minimum Wage." Our goal here at EAMythicware is to also make the game as realistic as possible, so we're giving these construction workers this ability that gives the class 5 silver when used.  Can only be used once every 72 hours.

Ironbreaker
Bug Fixes: Rick Astley will never give you up. I just thought I should let you know. This is also a filler space because we actually don't feel like fixing anything for this class.
Balance Changes: Made them taller. Why? Who cares. Now they're taller. What's done is done.

Knight of the Blazing Sun
Bug Fixes: SURPRISE! We fixed a tooltip issue that we're still not going to reveal to you
Balance Changes: Added ability called "Rage Quit" in which the Knight of the Blazing Sun gets rolled by a premade, then proceeds to the forums to tell everyone why they do not like what has just happened. Locks you out of the game for 23 hours. (Not 24, 24 would be too mainstream. We here at MythicEAware are hipsters too)

Shadow Warrior
Bug Fixes: Festerbomb now correctly deals 5 damage.
Balance Changes: Added ability called "Arrow to the Knee" in which they shoot an arrow towards the knee of the opponent, and the opponent must become a warcamp guard from now on. Because... they're no longer an adventurer... like in... Skyrim...
Posted by Jello at 11:37 PM No comments:

Labels: Never gonna give you up, never gonna let you down, never gonna remember the lyrics to this song if my life depends on it
Posted by Jello at 11:35 PM No comments:

Well, as I haven't been making blog posts lately it pretty much goes without saying that I'm not as active as I used to be. :(
So this is pretty much my official goodbye from blogging and super active pew pew playing.
I actually still check my blog stats and see how much views I get every now and again, and I'm surprised to say it's still over 1,000 in the past few months that I have been inactive, which flatters me. Whether you're looking for pictures of cats or just... looking cause you're bored I appreciate all the people who have come to my blog. I really honestly didn't think I would get over 500 views but hey, adding a cat here and there (particularly an obese kitteh) will boost views a bit, right? :-P

I would thank certain people for making my Warhammer experience extra awesome, but the list is too long and I'd undoubtedly leave out people that really deserve it (after all, everyone has made my experience better, and I can't remember everyone). And like... who cares what I think :P

I'll still be on Warhammer doing maybe a scenerio or two, but if you happen to see me in game, it will be on a t1-t3 alt whose name ends with "oftru".. most likely.

And as I say goodbye, I shall give you all a parting picture.

Very random indeed, but it is my obese kitteh and a turtal. A very ninja turtal 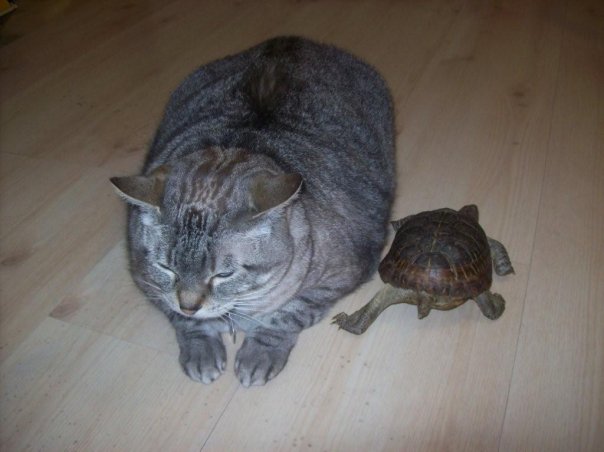 Quite awhile ago.. dont know why I never made a post for it til now :P
Posted by Jello at 5:55 PM 2 comments:

Quite awhile ago.. dont know why I never made a post for it til now :P
Posted by Jello at 5:55 PM No comments:

I decided to take a scenerio right after I entered a Thanquol's Incursion. Worst. Idea. Evar.

First, whenever you leave TI you get the exit scenerio screen, which was stuck on my screen in the scenerio, so I couldn't see anything. 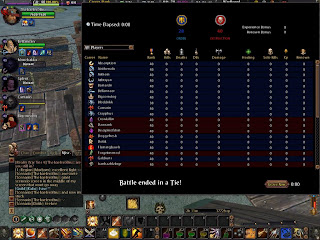 THEN as I was trying to navigate my way trying to avoid the stupid screen I fell.. and became stuck where I fell. 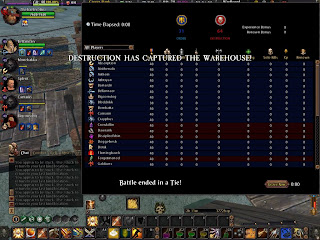 Woot! Made it 2 feet then got stuck, after waiting for the scenerio to end (Which was annoyingly long considering it was a Reikland Factory SC) I found myself in a new instance of TI.. stuck inside. 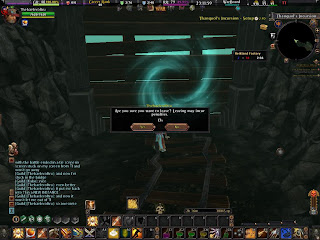 No matter how many times I press Yes, it does not let me out, so I am stuck in TI trying to find a way out.
I guess I'll need to wait the 20 minutes for my book of binding to cool down.
Posted by Jello at 10:24 PM No comments: