I take pictures of my cat because I FEEL LIKE IT!!! Oh yeah and rvrpack+1.4 thursday :-)

Note: New blog feature added, popular posts for last 30 days, shows 5 most popular.  So, if theres newcomers to blog they won't be like "OH MY GOD, THIS BLOG SUCKS" because 1/10 of my posts sucks, you can just jump to the best ones (May I recommend what the devs want to say to the fanbase :D)

When I found out that the rvr pack was coming on 11/18 I rushed downstairs and started screaming at the person who was currently playing WAR about it.
Their reaction wasn't so excited as myself. 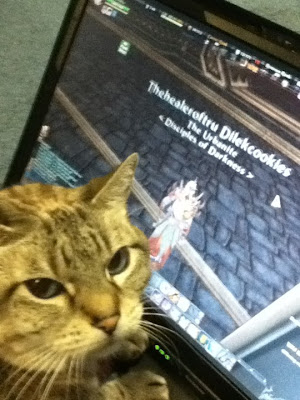 YES! YES! OH MY GOD! Ok ok! I'll stop I'm done with the cat pics...
But I started screaming and the person playing ran away under the couch to ponder/sleep about what the rvrpack will be like.
So I could then scream in /t4 "GOYZ! GOYZ! THAR BE AN RVRPACK 11/18!" and people giving me tells that I'm trolling and stuff and when I bet 500g they were like "OMG yooz real!??!" (Ilthay -_-)
But to be honest, I could give a damn about rvrpack, I don't want to grind more levels, I'm having a perfectly good time relaxing at 80, I don't want to stress for two more years to hit 100.  The thing I am loving though is the 1.4 changes to tiers and SCs, I am so excited for SCs.
I'll be honest, I was addicted to solo healing for renown during my time grinding to 80, now with the ranks I highly doubt I will do that.
I am also very fond of the white warpforged helm.
I don't have a picture for it, but OH MY GOD it looks like something I'd dress a 5 year old in for halloween. It's pretty uh... weird. It's like a kitty face for a helm :D
Poll Results:
You play a...
Healer: 24%
MDPS: 17%
RDPS: 17%
Tank: 12%
Rapist who climbs in windows and snatches people up: 29%
Mythic could release another xpack where Rapists who climb in windows and snatch people up is a race and the population boom for that class would be enormous. :D
Posted by Jello at 6:10 PM