Thehealeroftru: THE DRAGON KING OF CALEDOR! 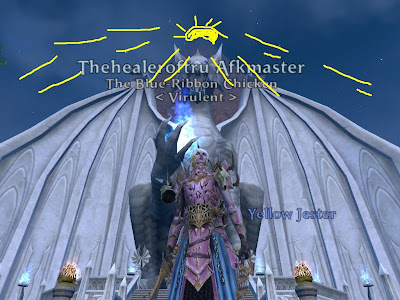 I figured it would look more epic with a sunrise in the backround, but there was none, so I improvised and made my own.  Isn't it pretty?
Umad Eka? You not happy that I killed your beloved king of whatever and took his title?
And now Eka would say that I cannot become the Dragon King of Caledor because being the Dragon King of Caledor comes with responsibilities with nature and High Elf stuff like that.  Well don't worry, I already have all that crap covered, I have all the responsibilities down!

As a matter of fact, I just settled a fight between two DRAGONS today, yep, they were argueing and I fixed it. 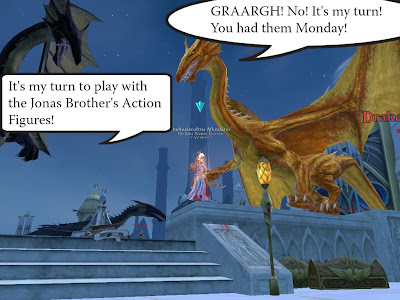 Conclusion:
Black Dragon gets Nick Jonas.
The Yellow Dragon gets Joe Jonas
And then cut the other Jonas in half and they each get a half.
However with responsibilites comes power.. or is it with Power comes responsibility... Hmm.
Anyways, I have good power as well, today in Caledor an order player I was fighting rolled too closely to a lair, and I CALLED DOWN UPON THE DRAGON GOD AND MADE THE LIZARD KILL HIM 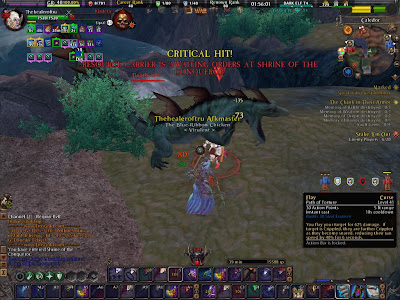 That lizard did what I could not, that being kill a sword and board knight.
I will occasionally continue to update you on my journey as the new Dragon King of Caledor
Poll Results: Do you have /t4 access?
Yes: 33%
No: 44%
Depends: 0%
Only if I get to spam it with facts about cats: 22%
Posted by Jello at 1:55 AM