The only people who do not hate DoKs, are DoKs

So Samuel L Jackson, what do you think of DoKs? 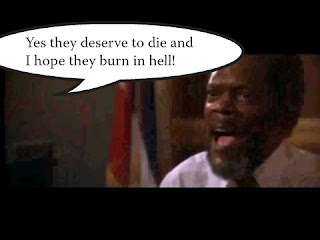 I didn't ask you if they needed to have that happen to them, but thank you for informing us on how you feel.
I've been playing in t2 lately on my WH on gorfang Thehaeleroftru (Some moron took 'Thehealeroftru') and I notice that a good 33% of classes I see are DoKs, and it makes me very ashamed to have a DoK.  It's like when you were a kid you get that new toy that's cooler than anything else, then everyone else starts to get that toy and you're like "Wtf, I hate that toy"... no just me?

But it kind of sucks when you're beating on a sorc or something and some dok comes over and is all "LOLREND SOUL! LOLREND SOUL! YOU DEAD BROSEF!" Then /lols at your dead body.  Oh well, better go leech some more renownz.

Mine is empire/chaos or Kitty/doggy.  By the way, I encourage you to vote on those.. I also would like to say I have a new header thing at the top.  Instead of saying something about muffins it now says something relevant to the world.
Posted by Jello at 4:42 AM