Today in my third city instance EVAR on my Warrior Priest (EVAR I say....EV....AR...) EVAR!
Anyways, I crashed client so I could be a champion, and I was :D.  After a long emote war with all of destro, stage 3 finally came and I was a happy little/big champion. 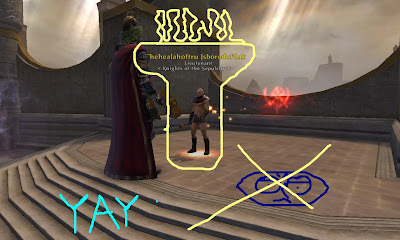 I tried to draw stewie griffin, but I failed so I Xed it out because it sucked.  I also drew the olympic torch with me inside of it.. but thta failed to.. And I didn't want to cross it out.
But I didn't win because I was outnumbered by destro,it was 12 to 1.  And a rank35 doesn't fare well again 12 high renown rank players.
But the emote made it better.
Poll Results:
The New Dungeon Is...
Fun: 0%
Boring: 14%
Meh, it's alright I guess: 6%
Never Tried it: 21%
SAMUEL L JACKSON SWEARS BETTER THAN ANYONE ELSE: 57%
On a side note for this Poll Result: Samuel L Jackson is the ONLY PERSON IN THE WORLD EVAR that can say "Mother****er" and make it feel like you've been tickled by the feathers of angels and dipped into a nice sweet warm pool of happiness.
Posted by Jello at 3:09 PM