BUUUT, there is the PTS I went to yesterday, You see what happened, was there was a large bug that made them end the PTS prematurely (They said at the moment it only allows a certain amount of instances to be active at one), BUT I still got into the dungeons.  Lets start a clock of how I got in even though the instances were full.

0:00:00: Everyone tries to join in the dungeon, we're all transported to Norsa :D
0:00:30: Mythic announces they're ending the PTS as it's a bug that will take coding to fix.
0:00:00-0:10:00: Immature assfaces CWY CWY CWY in advice chat and region, they obviously didn't get the term TEST. Say it with me. T-E-S-T. TEST, Don't think it was supposed to go smoothly. While it is a preview for new content, that is not all it is, by coming to the PTS you are agreeing to help them with the new content, they can't test with all the devs, because this dungeon-thing is a 24 VS 24, there are not 48 devs.  During this 0-10 minutes I try to calm people down by telling them the sad truth of why they were invited here, but all I see in chat is "WAH WAH WAH CRY QQ, /EMO", One notable quote was "IT'S 3 AM HERE, WHY CAN'T THEY MAKE A TEST JUST FOR EUROPE" which I promptly threw my computer out the window at, because if you read the herald, they DID.
0:10:01: People quitting after the QQing.
0:15:00: The smart people stay, do orvr til more people leave.
0:20:00: TADAAAAAHHH an instance open because everyone left.

"Great things come to those who wait" -Some famous guy probably

Also, I lead the BESTEST BESTEST WB EVAR because it was an all Gorfang Warband, not that I don't like other servers, I just like running with people I know (we did invite a few people from other servers because there weren't that much gorfangys) TY for all those destro who came to our gorfang wb

Anyways.  Here's some Screenshots of the nice little instance. 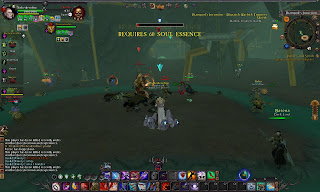 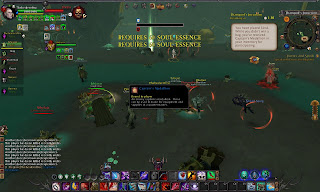 As you can see, the one above has a new item and lots of PUS, LAWTS AND LAWTS OF PUS.
No, not really, not lawts of pus.
But skeeter or whatever the hell his name is is the first boss. (He's a hillbillay Skaven) Skeeter's PQ drops green bags. Just green bags.
I didn't get past he second boss or get to the third, because I got bored.  I'm sorry to say that, I really am.  But you just run in a big room, and then you meet order with the boss in the middle, and you aoe the crap out of everything. It wouldn't be so bad, but GOD are those bosses tough, I swear 30 minutes after boss 2 started he was still above 50% (and that's not an exaggeration, not even joking with you)
So, they're fixing it, test'll be maybe next week, hopefully we don't get as much Chris Crockers (ZING)

In other news, my wonderful WP has hit t4, and is not doing bad at all :-D 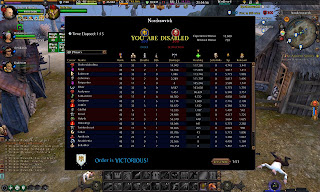 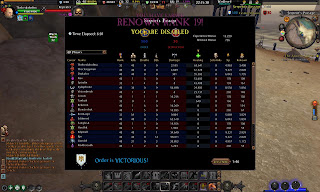 Those are two of the times where I've been top heals.  I've come extremely close a lot of the other times (Mostly within 5-10k heals) but sometimes I do terribad and get like 50k off. :-( I WILLY WILLY WILLY like playing this Warrior Priest. It makes meh happay.
And now for poll results:
WAIT WAIT... "THAR BE NO POLL RESULTZ TRU, WHAT YOU DOING"
I don't know.
Nevermind.
Posted by Jello at 2:14 PM