Today I almost made it to city simply by saying in alliance: "Anyone wanna go take a BO or two".
I took the BOs in DW then holy crap, a dude advertises my wb in /t4 and in an hour we had 3 WBs running around.
After the flips of Praag and DW, we went to reikland and finally met opposition. By now we had about 5 WBs. So we flip Reikland and head to Eataine. Holy crap. We had a rank 4 keep and a rank 8 keep. The rank 4 keep we took down. Then we moved on to some BOs and finally the rank 8 keep.

We had so many people running in the same direction I felt like I was at a spanish soccer game. People running around, trampling young children, mad their team lost. A good chosen on the server, Deathicael, always says that WBs start up when someone 'Throws a chair'. I finally get what he meant. We had a freaking riot running around and so did order. The worst part is, I usually NEVER do orvr nonetheless lead a WB.  This was my 1st WB ever and it happened to almost make it to the city, in primetime!  Anyone else feel this is quite an accomplishment, or am I just being a scrub. 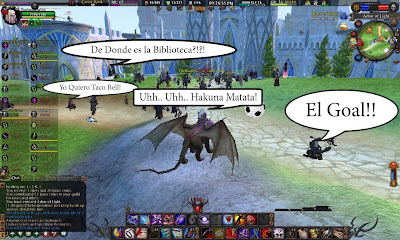 The above is the picture of us charing to the keep.  At 1st sight it looks like there is no order inside.  So we set up the rams, started banging on the door.  We get the ram up, and we get oil poured on so on so forth regular keep experience. I'm thinking, 'Hey we're not doing bad!' and then we get to the 2nd door.
I have no clue how much people order had, but it had to be over 200.  We had to hold off 2 WBs coming from east and west sides of the keep, then to top that off there were a bunch of rdps at the top near the oil and certainly lots more in the lord room and on 1st floor.  After maybe 30 minutes of me trying to keep it together in vent, and the whole WB afking because (Later told to me in tells) "It's a keep, nothing ever happens in keeps, we just went afk because we were bored."
Yeah well nice job.
FINALLY, the door breaks down and we charge in leaving the 50 people afk to be slaughtered.  The remainder of the people climb of the stairs only to be met by a ton of order.  I took a nice screenshot to show that I was the 1st one in the lord's room :-D. 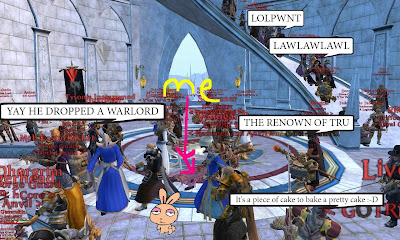 This isn't even the most order in the keep, I took 2 Screenshots because in the 1st one, there were so many order you couldn't see my body.  This pic so happens to be right after 3/4 of the people in the room ran out to wipe the other destro.  Then after the wipe.  Everyone sorta.. left... So I tried to take BOs in BC, but then order showed up and wiped us all. Then I stopped to write this blog post.
But, if you look at the good side.  The 1st serious WB I have ever led, I almost made it to the city, ONE zone away.  Go me.
Posted by Jello at 9:39 PM