Today was my 1st day doing RvR in a few days and I thought it would be boring.
It was.
Really.
It was boring.
The end! Good bye.

Just kidding.  Today wasn't bad at all.  In Caledor there was some pretty good rvr,  not that I participated.  More of running around and doing nothing.

After running around a bit, I came up behind torgaan and Stabbed him in the back with beef jerky spammed /cheer at him while running around as a skaven.  I really thought he would then invis then come friend behind me and kill me faster than.. faster then.. uhh... I have no comparison.  I thought he would just kill me fast.  But instead to my pleasure, he turned into a skaven and started running around too. Luckily before we got wiped (Which you will see an imitation of in the screenshot) I got a nice screenshot so I can show off. 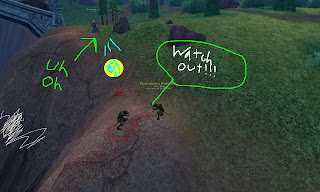 I tried VERY hard to save Torgaan.  But my efforts went unnoticed as a bunch of destro nom nommed him up.  Poor Torgaan.
Now for the $250,000 dollar question...
My next screenshot is... 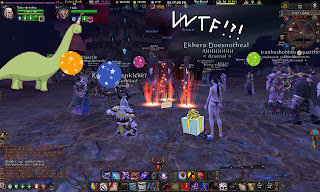 You're all wrong the answer is "A guild meeting" but I really thought this was the most epiczorz guild meeting I've ever seen. There were banners in the middle, 1/2 of them all were naked, There was dinosaurs, ect.
It looked like the biggest WAR party I'd ever seen.
I was really tempted to stab them in the back with beef jerky run in with my guild banner and just slam it down and start doing /dance and /cheer.  But I knew that would probably not be good.  I think my guild should from now on do our guild meetings like this.  It would make me the happiest dok in the whole entire world.
Posted by Jello at 7:10 PM

Labels: Arsenal, Skaven, Torgaan, Why are Burritos the bestest