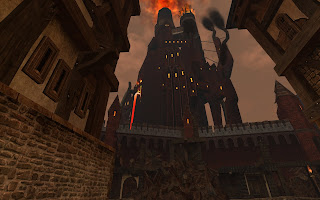 For the 1st time in my WAR time, I entered the Bright Wizard College. Yeah I'm a bit behind.. It was quite easy, easier than I thought it would be at least. I shoulda taken screenshots but I was too concentrated on the artwork and whatnot... So, I will explain what happens for those of you who do not know. (Without SS)

To get into the BWC the city must be in stage 2, Altdorf that is, and you must be destruction. The portal to enter is north of the BO Bright Wizard College. When you enter you go through this little twisting hall. There you come to a room with 4 Hero guards (warded I might add) and a few sprites. Kill the sprites and the heroes and you progress to the next stage of the PQ.

Someone told me you can bug this stage but I dunno how... Anyways, there are 3 floors you progress too on this stage, and there are 2 cubes on each floor. You destroy the cubes and the boss of the BWC becomes available to kill.

As long as you don't attack the champions near the broken Cubes, you will be ok (if you do, the cube respawns). As far as I know, he only has one move, and that is he puts a bomb on someone (or something) and it blows up. Make sure the person who has the bomb gets away from everyone else. Other than that, I don't think he hurts people that much if you have good healers.

Now once he dies, the loot roll begins and everyne gets a free crest. In my instane, 6/10 bags were won by non 40s, 2 of the 40s were in conq gear, and the 2 who were ready for warlord each got green bags.

Next time a city seige happens, good luck!
Posted by Jello at 12:03 PM